Scroll down to read about this magnificent choir 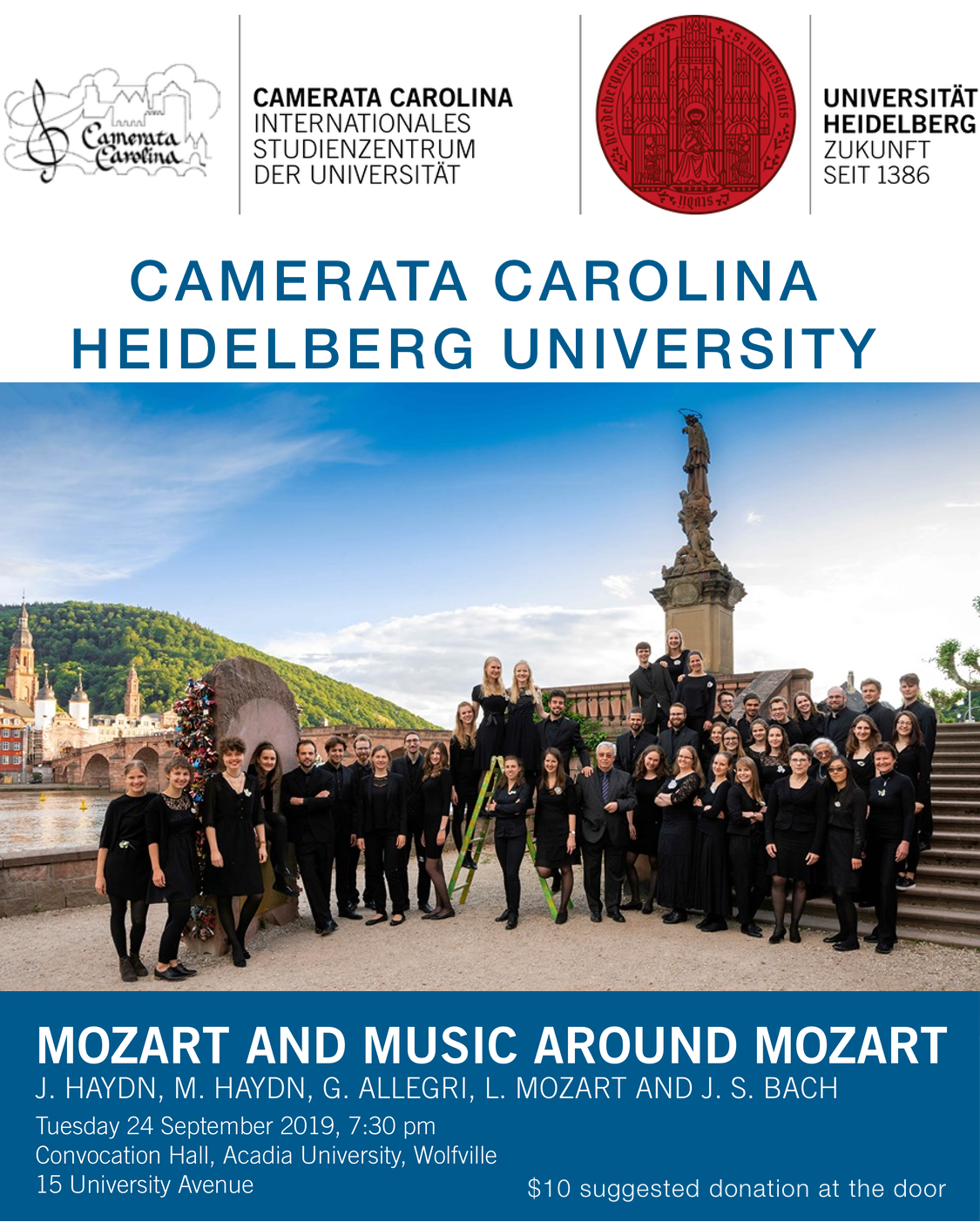 Prepare to be thrilled by the award-winning and internationally respected chamber choir of Heidelberg University, the CAMERATA CAROLINA (International Study Center). This musical journey of discovery will explore works by Wolfgang Amadeus Mozart, Mozart`s father Leopold – born exactly 300 years ago, in 1719 –, the two brothers Michael and Joseph Haydn, Mozart's Viennese colleagues Reutter, Hofmann, and Salieri, students of Mozart, and of Mozart's most admired musical forebears: Gregorio Allegri with his legendary “Miserere” and Johann Sebastian Bach. Be inspired by the music of these masters, which complements the natural flow, elegance, meditative moments, and splendorous heights of Mozart's musical language. Discover brilliant interpretations of musical treasures with the CAMERATA CAROLINA under the direction of Prof. Franz Wassermann.

With 40 members, the chamber choir Camerata Carolina is the “little sister” of the full-size Capella Carolina, with its 115 members. Both belong to Heidelberg University’s International Study Centre. The Capella rehearses and performs a major oratorio or full-scale choral work each semester; in the summer semester of 2019 they performed Mozart’s Requiem. In contrast, the Camerata focuses on challenging a capella repertory from Gregorian chant to the present day, performing with an orchestra only from time to time. The Capella was established by Prof. Franz Wassermann in 1993, the Camerata in 1994. With its high musical standards and restriction to 35 – 40 singers, the chamber choir is a necessary and impactful counterpart to the voluminous Capella. As a musical ambassador for Heidelberg University at an international level, the Camerata frequently makes guest appearances abroad. The choir is also much sought after to provide musical adornment for special university events and other festivities.

International Appearances
The Camerata Carolina frequently undertakes successful concert tours, which have received great media attention in the past. With special programs for each occasion, these tours have taken the singers to Canada and the United States many times, including performances at Yale University. In 1994 the Camerata performed in Chile – Santiago, Valparaíso, La Serena – and in 1996 in Georgia – Tbilisi, Kutaisi, and Batumi. In 1998, the choir first performed in Armenia; in 2005, they gave the Armenian premiere of Brahms’ A German Requiem, together with the choir and orchestra of the state opera in Yerevan. The choir has performed repeatedly across Italy, Switzerland, Austria, France, and Lithuania, including a notable appearance at the 2017 Lithuanian state music festival and 2018 in Italy: Venice and Padova; numerous concert venues every year throughout Germany.

Distinctions and Awards
At the Concorso Internazionale in Riva del Garda in 2008, the Camerata Carolina was awarded the Diploma in Gold and Silver in two disciplines. At the choral contest organized by Southwest German Broadcasting in 2012, the Camerata won first place, well ahead of its competitors. The Camerata also took home a Diploma in Gold from the World Choir Games in Riga in 2014, having competed against 211 other choirs in the Open Competition.