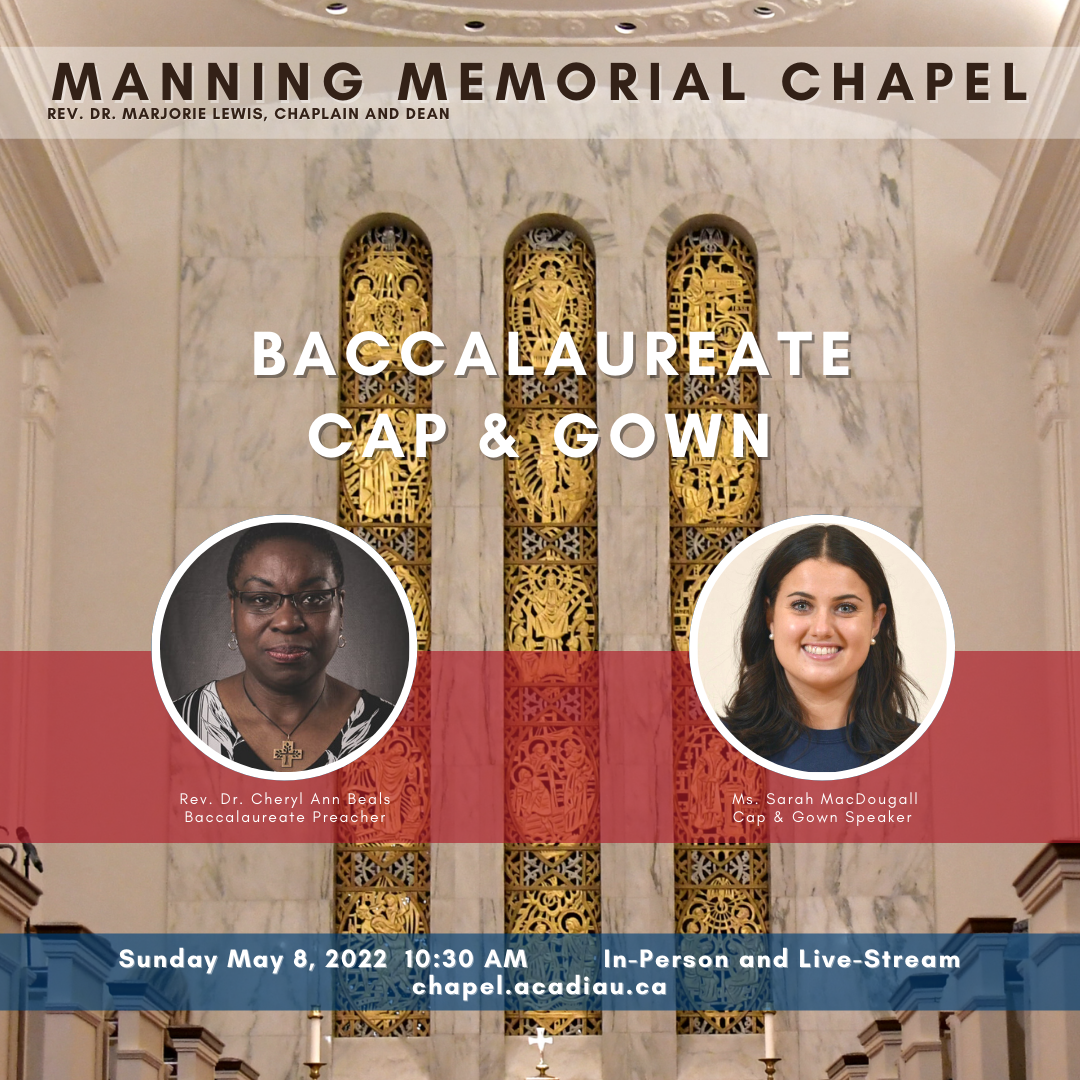 Click for link to livestream of Baccalaureate Service and Convocation Ceremonies 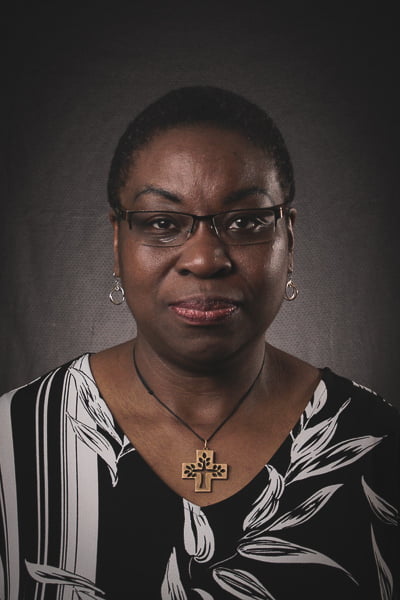 Dr. Beals is the Director of Clergy Formation & Wellness for the Canadian Baptists of Atlantic Canada (2013- ). She is also the former pastor of Victoria Road United Baptist Church, Dartmouth, NS, which is part of the historic African United Baptist Association of Nova Scotia. (2008-13). She has been in ministry since 1987 including:  a teacher of missionary children in Carolina, Brazil (1987-89), Christian Counsellor in private practice (1991-2001), minister offering Pastoral Support to churches (1995-2000), and Canadian Ministries Manager with Canadian Baptist Ministries (2000-2007).

Dr. Beals is a graduate of Acadia University, Wolfville, NS, with a Bachelor of Science Honours (1985) in Psychology and a Bachelor of Education (1986) in Special Education. She also has a Master of Education(1991) degree in Counselling from the University of Western Ontario, London, ON, and a Master of Divinity(1995) degree from McMaster University, Hamilton, ON. She was a recipient of the Benjamin E. Mays scholarship (1993-1995). She is also a graduate of Arrow Leadership (2005), Vancouver, BC.

Dr. Beals was ordained in 1998 by Sunrise Baptist Church, London, ON, as part of the Canadian Baptists of Ontario and Quebec, and in 2007 transferred to the Canadian Baptists of Atlantic Canada. In May 2016, Dr. Beals graduated with a Doctor of Ministry degree from Acadia University. Her thesis entitled, “The Art of Belonging: Clergy Formation and Wellness” explored burnout, well-being, and resilience among Canadian Baptist clergy in Atlantic Canada. She is also a spiritual director (2019), she completed her training with CenterQuest School of Spiritual Direction, California, USA.

Her passion is to live in growing freedom in Jesus Christ while assisting others to do the same, especially Christian leaders. She has a desire to see well-formed resilient spiritual leaders and spiritual communities, where people experience healing and transformation, are empowered & equipped to be faithful and resilient, even amid trauma & adversity.

In 2019, Dr. Beals returned home to the historic Black community of Cherry Brook, NS, where she built her home “Kardia Lighthouse” on her grandmother's property. She takes great pleasure in nurturing people and plants. Spiritual conversations about how God is at work thrill her. She enjoys spending time with friends and family; gardening, especially veggies & herbs; thrift shopping, and getting away with God on retreat. 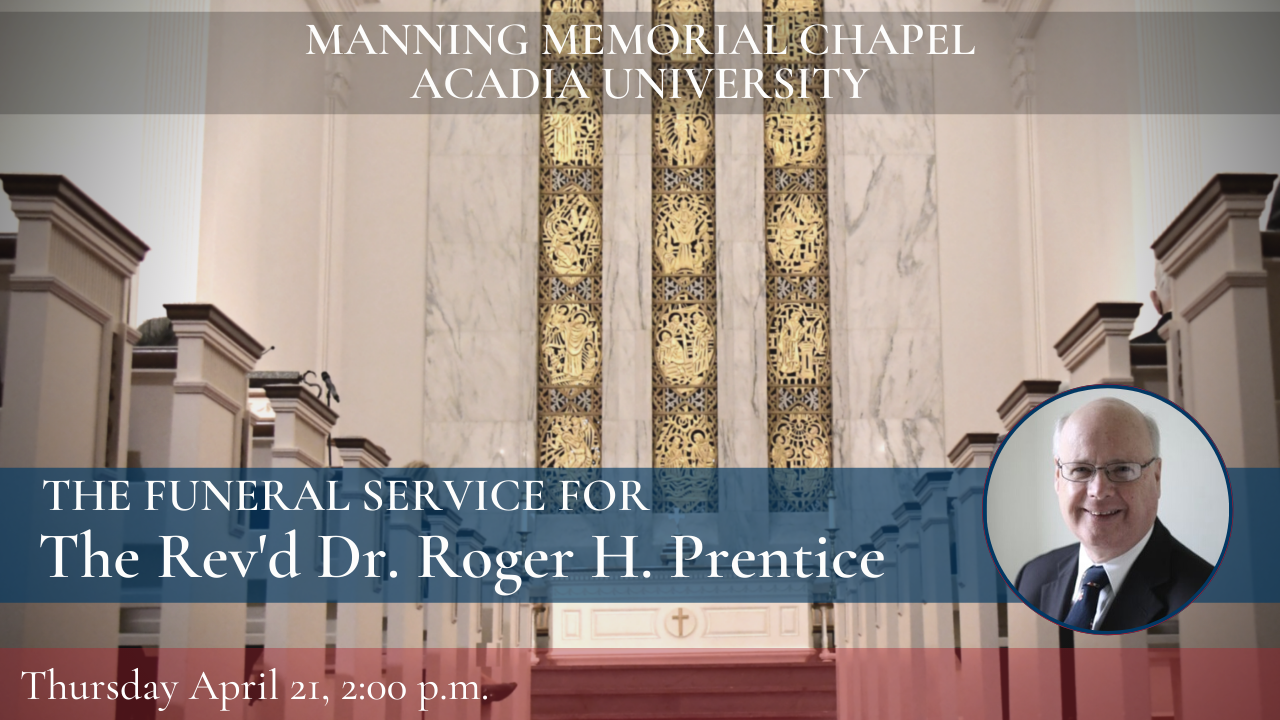 Prayer and Worship Resources
During the Coronavirus Pandemic (Covid-19)

Description: Daily Prayer inclusive of preparation, contemplation and Bible Reading developed by the Irish Jesuits.  Also available in other languages.

Description: brief prayers and meditations by a diverse and dispersed community of Christians who commit to Celtic daily prayer; social action and mutual accountability.  Morning and Evening Prayers are also available.

Lord God of all wisdom, we pray for Acadia University, that she may be faithful to the purposes of our Founders, continue to promote the search for truth and knowledge, and be an inspiration to others who follow. May we be a community of scholars sharing this ambition, caring for one another, and loyal to the truth revealed to us as thy disciples. Amen.

Information on the Office of the President and Vice-Chancellor

Information on the Faculty of Arts:

Information on the Faculty of Professional Studies:

Information on the Faculty of Theology, Acadia Divinity college

Information on the Faculty of Pure and Applied Science

Information on the Faculty of Research and Graduate Studies

Daily Prayer Focus for the World

Description: Letter and prayer from the Indigenous Elders Council affirming good leadership, mutual support and the value of prayer and ceremony during the COVID- 19 experience.

Praying Together as we face COVID-19 (2 minutes)

Description: prayer of the Jamaica Baptist Union that can be adapted to make specific mention of other countries

Cancer During COVID: A Meditation (13 Minutes)

Description: Introduction and general reflection on suffering and death followed by compassionate guided meditation. Presented by Nova Scotian Hospital Chaplain as resource for persons with sick or worried relatives whom they can’t visit in person.

Give thanks for: the beauty of nature, the love of friends and family, the joy of pets

Pray for: Religious Leaders, Governments, the United Nations, activists for peace and the preservation of the environment

Give thanks for: creativity, innovation, skill and the human potential

Pray for: Entertainers and all experts in the visual, performing and plastic arts; experts in business, innovation, communication, human development, justice and peace.

Give thanks for: life, strength, abilities; opportunities to study and grow

Pray for: people with disabilities; Indigenous peoples, people of African descent, ethnic minorities within countries; students who struggle to find food, finance tuition, or fear falling behind in their studies.

Give thanks for: God’s love, power and mercy; freedom to worship and opportunities to serve others

Pray for: people of faith who struggle with doubts or have lost their faith; those who experience prejudice or persecution because of their faith; the World Council of Churches.

Give thanks for: help, health, healing, hospitality, protection and kindness.

Pray for: Those who are lonely, elderly, imprisoned, homeless, struggling with addiction; children without care and protection; victims of human trafficking; those isolated and alone because of COVID-19.

Give thanks for: those who teach, inspire, design equipment and develop therapies to support human well-being and right use of the world’s resources.

Pray for: refugees and displaced persons; those who are abused, sick, dying, worried, living in war zones; and those who have given up hope; Doctors, Nurses, Lab Technicians, Cleaners, Garbage Collectors, Security Personnel, counsellors, Caregivers, Social Workers, Volunteers and all working to prevent infection, treat illness and ensure safety and well-being during the COVID-19 pandemic

Give thanks for: rest, leisure and laughter

Pray for: those without recreation, those struggling to do the right thing, those living with poverty; those who have experienced trauma, those without access to a regular and clean water supply, those with no space to practice social distancing, those we dislike and those who we think are hostile towards us 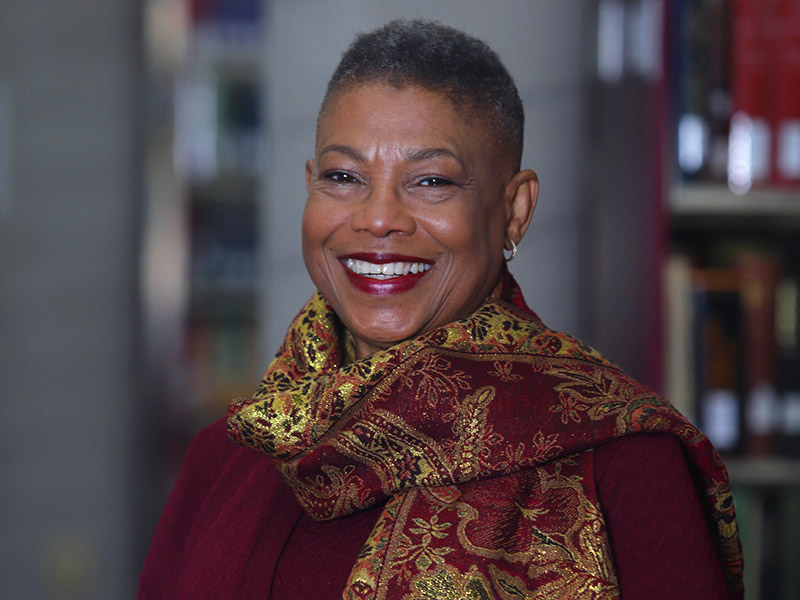 Walk With The Cross
Good Friday